With this sort-of one year anniversary, I thought it would be a suitable time to post some statistics from the last year or so of light novel releases. Unfortunately, due to some of the changes that have occurred over this time (set out in the previous blog post) there’s not all that much data that I can easily put together for the entire year. Plus there have been a few blips along the way, which I thought I had best establish before starting. All the data below comes with the following three caveats:

– There is no data for w/c 15th September 2014. I had asked someone else to post it for me, but they never did, and I overwrote the data with the next week before I found this out. Fortunately, due to the fact that the first post was made on a Wednesday, and the data here includes the ones that will be posted yesterday, this actually makes it closer to a year’s worth of data (1 day too few rather than 6 too many), although there is some overlap.
– As mentioned above, the releases for 3 weeks in February which are not listed as being published under a recognisable label or are published by a label that is in no way a light novel label are not included.
– It is possible that an entry or two has slipped through the net as a result of release date change at exactly the wrong time, or that a re-release slipped into the data at some point without me realising (I caught one which I hadn’t previously noticed when I went back through the posts).

Now that’s out the way, onto the data. There are four sets of data here. If you want to know more info behind something, or want to have a piece of data that isn’t here, feel free to ask, but bear in mind that there is a chance I will not be able to give a suitable answer.

Part one – the overall figure

The most obvious thing to take out of it is the overall figure.

Of the 52 weeks covered (that’s excluding w/c 15th September), there have been a total of 2680 different light novel volumes released. That’s an average of about 51.5 releases every week. Surprisingly similar to the guesstimate of about 50 that I made last autumn.

During this period, the highest total sales in one week was 103, on the week beginning on 22nd December, and the lowest was 0 in the week after. This is because every label that would usually release in the latter week instead put their volumes up for sale a week early so as to avoid the new year period. So it doesn’t really count.

Other than this oddity, the highest number of new releases in any one week was 98 on w/c 23rd February. This is probably because of the short month meaning that releases that would usually happen over a period of 10 days (and there are quite a few light novel labels that publish around the end of a month) suddenly all found themselves releasing on the same week.

The lowest, excluding the week of the new year, was w/c 11th August. The GA Bunko releases which would typically come out in that week instead came out early, and various small publishers that will release at that time simply didn’t have any releases out that month, leaving just 20 things coming out that week.

Most of the other quieter weeks are the first week of the month, particularly when this misses both the kadokawa releases in the last few days of the month before and the dengeki releases which usually come on the 10th. w/c 1st September, 3rd November, 1st December, 2nd February, 2nd March and 5th May all saw new release counts in the 20s. Only 2 other weeks during the period were in the 20s. 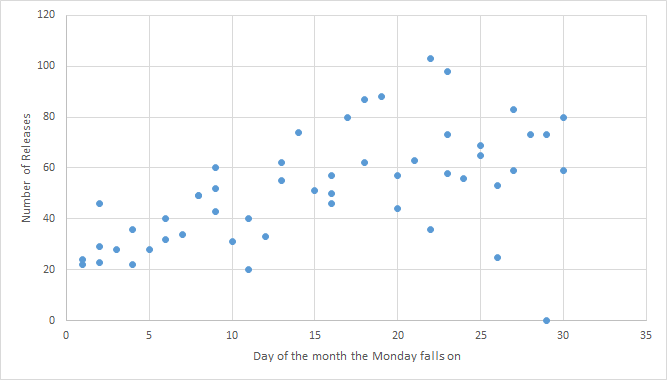 The graph above (in case it doesn’t come out clearly) has the number of releases in the week on the y axis, and the day of the month that the first day (Monday) falls on on the x axis. As you can see, later days in the month generally get significantly more releases than earlier ones, with a little dip around the 10-12 area which comes out just after the Dengeki release date.

About 8% of volumes released since I started the blog in October were published by labels that I now consider adult light novel labels.

This, incidentally, is a long, long way away from the proportion of novel entries on MAL that fall into this category, which comes in at a whopping 38.6%!

I can think of four likely reasons behind this difference:
– Firstly, and perhaps most significantly, adult novels tend to be just one or two volumes (they make up just 34 of the 836 “novel” series that MAL has listed at 3 or more volumes – that’s 4%). This means that there are fewer volume releases (read: entries on the light novel releases) per series (read: entries on MAL)
– Adult light novels are more likely to meet the requirement for inclusion that MAL has which states that a light novel must have an author or illustrator that has already contributed to something on the database. Adult novel labels tend to have relatively small numbers of writers and illustrators that all work with each other to churn out large numbers of series, meaning that if one of these also puts out a manga (which is pretty much a certainty) then there’s a sort of domino effect resulting in every series from that label becoming addable. Incidentally there are also illustrators of female-audience (especially BL) novels that churn out scores or even hundreds of works, but these ones suffer heavily from the next point.
– There are several labels that by and large don’t get volumes added to MAL at all (other than me when I add them whilst building up the weekly release list). These are mostly ones aimed at a female audience, and none of them are adult labels.
– the vast majority of the adult novel titles (and a disproportionate number of other ones too) were added by just a single, extremely prolific contributor to the database…

Whilst on the topic of MAL, I wondered what proportion of new volumes have light novel entries at the time of creating the list. It’s worth noting that there have been a small number of times when I have created the a day or two out, but the vast majority of the time I went through MAL on a Monday morning.

As I only started linking to MAL entries for every entry on 30th June, I can’t use data from before that. In this time, the figure was 45%. That’s right, less than half of the volume releases were from series that were on MAL. And that’s counting after I added quite a few of them to the database whilst going through the list.

This, though, hides large fluctuations between the weeks, from just 12.5% up to 72.7%. Perhaps more interestingly, the period can be neatly divided into 2 parts – during the first 10 weeks (up to and including w/c 1st September), not a single week had over 40% of releases with MAL entries; 32 of the 36 weeks with data since then have been above this figure. There’s also a definite increase up to November/December, after which any change became too minor to be visible above the noise, but the proportion seems to have flatlined or even fallen slightly.

However, it’s worth bearing in mind that from the start of February I no longer posted any adult releases, which means that I stopped looking them up on MAL, so these are no longer included in the percentage figures above. As we’ve seen, adult novels only account for a small proportion of releases, but they are also disproportionately included on MAL, averaging around 75% for the period up to the point at which they were excluded. The difference that is made by assuming that this proportion continued is nothing spectacular and would probably be barely noticeable if I posted the new graph, but it boosts most of the percentage points for weeks since then by between 2 and 5%, which is enough to get rid of any suggestions of a drop in MAL’s coverage.

It’s worth considering that there have been several weeks in which I have added every single eligible release to MAL that wasn’t already on there. Thus these weeks are effectively at 100% of possible entries. I don’t remember exactly which these were but I do know that w/c 2nd March is one of them – a week for which just a little under 60% of entries were on MAL even after my additions. The rest of these are all series which at the time were prevented from being added because of the rule stating that the author or illustrator of the light novel must have contributed towards something already in the database, thus giving the lie to the argument that this is no longer a significant restriction.

I wasn’t originally going to do this bit, which is why I’m posting this rather later than I said I would. Part of the reason for not originally intending to do it is that I only have the data for it back to when I started this blog, but I decided that, for some people at least, it could be the most interesting thing of all. This is simply to look at the number of light novels that were released by each light novel label over this period.

The data below actually covers from 21st October to 20th May, so as to give the same number of months of data to each label.

That’s a total of 89 different labels releasing during this 7 month period.